Donuts were always a random treat in my house growing up.  We lived at least a half hour from civilization.  Sometimes when we would walk up in the morning, our dad would have left us a dozen donuts.  I don't love donuts, because I love a savory breakfast with eggs, but I can appreciate the bite of a donut now and again.  There are some amazing donut places popping up all over town. I haven't gone seeking those donuts out, they have instead found me. It is spring break next week so those of you in Orange County should treat yourself if you are up early and start your adventure by sharing one of these.

1.  DG Donuts  These donuts are in a Chevron station out in west Orlando in a community called Oakland.  A co-worker brought the six donuts in the picture above to work last Friday.  I wish I had put something next to them so you could see their size.  These six donuts probably add up to dozen. These are the ones that you share.  Cut them in fourths or eights and you have a nice bite. You have to go early or they will be sold out.  I suggest that you stop there on your way out to pick blueberries. 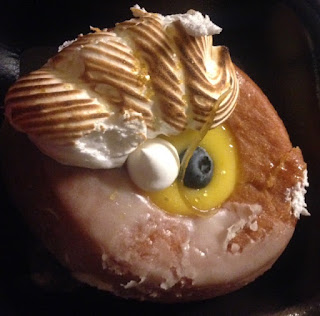 2.  Glass Knife  When my friend got married last week, they had donuts from here rather than cake.  They were scrumptious.  Possibly as good as this lemon meringue donut was the apple fritter. I don't even like apple fritters, but I can see why someone would after trying it.  We also tried a creme brulee donut.   My husband indulged in the peanut butter chocolate.You can head to this new Winter Park bakery for lunch and take some donuts home for the next day.

1. Donut King  There are three locations in the central Florida area.  Again a coworker brought these to share.  I love the bacon maple frosted and the key lime here.

NOTE:   Krispy Kreme  Nothing beats a hot fresh and now as the glowing red sign boasts in times of desperation.  I could spend hours wend their way down the glazing machine. Tomorrow they are going green.

I like to wash them down with a glass of cold cold milk never coffee.  What do you like to indulge in for a breakfast treat? 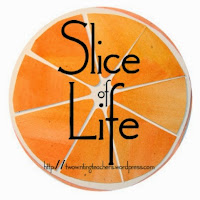