It's Monday: What R U Rdg? STEAMPUNK

The word steampunk might be unfamiliar to you.  Maybe you already know and love that genre. It is one of my discoveries at ALAN 2012 conference this year culminating in my completion of Scott Westerfeld's Leviathan trilogy this past week.  Steampunk blends the world of steam-age industrialization plus fantasy to yield an alternative history or world.  If you have read Westerfeld's Uglies series, you already know that he  masterfully crafts a world in the future, but the Leviathan series takes you to the beginning of WWI, a world of Clankers vs. Darwinists.

The narrative switches back and forth between Midshipman "Dylan" Sharp and the young Austrian-Hungarian Empire heir on the run, Alek. Both of whom carry secrets. Their paths intertwine and the adventure never seems to stop as the Leviathan travels across Europe, into the Ottoman Empire, over Russian and Japan and finally to America. You will recognize characters such as Tesla, Randolph Hurst, Pancho Villa, and Winston Churchill who have stepped out of your history books.  Both the Darwinist fabricated beasts such as Leviathan, Borvil, and Imperial Eagles, and Clanker's machines such as the Walkers, Hercules and Beowulf, will amaze you. {That link contains spoilers.}Westerfeld also deftly handles women's issues as well as embeds the language of the time takes you back to 1914. If you can get your students past the length of the books, perhaps by reading aloud, you will hook them. 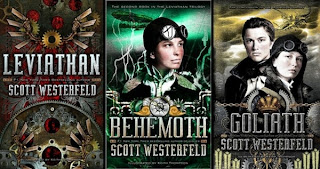 When I think about historical fiction, the 20th century and YA, I can bring up several titles set during WWII, the Great Depression, the Civil Rights movement, but few about WW I, which is one reason why the Leviathan series stands out for me. I would describe it as an action-packed guy book, but female students would like it as well since it has a strong female central character. Obviously, you might pick it for a social studies class, but the description of Leviathan and its inner-workings of the ship and fabricated animals might fit well with a biology class. As an English teacher, I might use it a lit circle set with The Odyssey.  It is one of the books that I like to put in kids' hands.  They read the first and then have two more on their "Reading Next" list.  It is also one of those series that I hate to get to the end. I've certainly grown fond of Mr. Sharp, Alex, and Borvil.

I even recommend this series for adults.  I passed it along to an adult who had read the entire Master and Commander series by Patrick O'Brian. He enjoys historical fiction about naval battles, but he also enjoys young adult fantasy novels.  I thought that the Leviathan series married the two well.  I am also thinking about handing it off to our ROTC teachers at our school since it combines war-fare, leadership, and problem-solving.

To learn more about the origins of steam punk, check out this blog. Steampunkscholar
at January 14, 2013