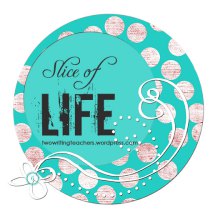 Don't you think the cool thing about teaching is that we two New Year's, one in September and one in January, to work on celebrating and establishing new goals? Writing routinely is a goal for myself this school year, which includes posting a weekly Slice of Life. Last week I messed up!  I did get up at 3:30 am last Tuesday. I did start writing my post. I wrote a decent first draft. I like to proof.  I put it aside for later in the day. I should have posted it then. I should have known that later would not come. Waking up at 3:30 doesn't bode well for the rest of the day. I ended up trounced by the fever flash-flu and ended the day curled up in bed. Rather than writing when I got home, I made a decision that at that moment meant more, getting well. Sometimes in our life we will have to make choices, but failure to achieve your goal doesn't mean you didn't succeed. Instead I learned a lesson about how to better met my writing goal the next time that happens.

I focus on getting good at one thing each year Last year it was working out, the exercise habit. Sidelined by recovery from ACL surgery has granted me a little extra time since physical therapy doesn't take as long as working out.  Therefore I have time to work on establishing my writing habit.  When I am released in January from PT, I hope to have established a writing habit, but also know that I need mile-markers along the way to keep going.

Much like my exercise where I chose some runs to celebrate and set goals of time and length, I have established some short-term and long term goals for myself. With my students, I learned that setting small concrete writing goals by marking our lines per minute with fluency Friday actually helped most of them improve.  It made writing tangible for them. Participating weekly in the Slice of Life is a tangible goal for me versus writing an article to get published, a goal, however, that looms long-term.  If I can't discipline myself to write once a week and work a little each day at writing, then I won't reach my long-term goal. I've made it through two Slice of Life monthly challenges in March so I will continue working on being a weekly contributor year-round. Happy Slicing!